Mercury pollution produced by coal combustion has been identified as a severe hazardous pollutant to human health and the environment. For the coal-fired power plants, one of the most cost-effective methods to control mercury is to use SCR catalysts, which can achieve both denitration and oxidation effects, simultaneously. In the present study, a new SCR catalyst, bromine-doped vanadia/titania oxide, has been developed, and its structure and mercury oxidation characteristics were systematically studied. Results demonstrated that, in compare to the control sample, bromine-doped vanadia/titania oxide has obviously higher amount of V4+ and Ti3+, thus resulting in an improved redox property. Activity tests showed that the catalytic capacity was highly dependent on the doping amount of bromine with a specific feature from ‘low to high to low’, The highest value for mercury oxidation of the product is [Br]/[Ti]=1.2×10-2.

Mercury and its compounds have considerable harm to the human digestive system, central nervous system and kidneys, and are one of the persistent environmental pollutants that are currently receiving sustained attention. One of the main sources of mercury in the atmosphere is coal-fired emissions. On January 19, 2013, the United Nations Environment Program adopted the Minamata Convention, an international convention for the control and reduction of mercury emissions worldwide. The Convention requires the control of mercury emissions from various large coal-fired power station boilers and industrial boilers. Therefore, mercury emission control of coal combustion is one of the hot spots of environmental protection research.

At present, the main idea in the study of SCR catalysts for elemental mercury oxidation is to add different transition metal oxides or combinations thereof [13], such as Co-Mn[10], CeO2 [14,15], Mo-Ru [16], RuO2 modified Ce-Zr complex [17], Au/TiO2 [18], CuCl2/γ-Al2O3 [19], Graphene enhanced Mn-Ce binary metal oxides [20], Fe2O3 [21,22], CuCl2-CoOx/Ti-CeOx [23], Co–MF [24], manganese oxide octahedral molecular sieve [25], Mn-Fe co-modified ZSM-5 [26], etc. These studies are important in how to promote the adsorption of the catalyst on elemental mercury and improve the redox capacity of the catalyst. However, is there any other way to strengthen the mercury oxidation capacity of the SCR catalyst? Existing mature mercury removal technology, coal treated by bromine can promote the oxidation of elemental mercury in the combustion process, brominated activated carbon can enhance the adsorption and oxidation of elemental mercury and brominated activated carbon is better than chlorinated activated carbon, HBr in the flue gas is better than HCl for mercury oxidation [27], which showed the importance of non-metallic bromine in mercury control. In view of this, this paper studies the effect of non-metallic bromine doping on the structure and performances of vanadia/titania catalyst from a non-metallic perspective, exploring new ideas for elemental mercury oxidation by SCR catalysts.

The X-ray photoelectron spectroscopy (XPS) was performed by the ESCALAB 250Xi device of ThermoFisher Scientific. The X-ray diffraction spectrum (XRD) was tested by the D8 X-ray diffractometer of Bruker. The specific surface area and pore structure were determined by the ASAP2460 of Micromeritics. The electronic paramagnetic resonance (EPR) spectrum of the sample was detected by the A300 equipment of Bruker. The elemental composition of the sample is quantitatively analyzed by Agilent's Agilent 725 series ICP-OES equipment. The Photoluminescence spectrum (PL) was tested by the FLs980 full-function steady-state/transient fluorescence spectrometer from Edinburgh Instruments.

The mercury oxidation performance test was carried out in a fixed-bed reactor (inner diameter 6.8 mm). The experimental scheme was shown in (Figure 1). 0.3 g catalyst was filled, then the simulated flue gas (3×10-5 μg/mL Hg + 5% O2, and the rest was N2 flow) was passed at 150 mL/min The Hg was placed into a quartz U-tube with a mercury permeation tube (VICI Metronics, USA) embedded in an isothermal water bath, then mercury vapor was provided into the gas stream through N2 current.

Before the mercury oxidation performance test, the simulated flue gas was introduced into the fixed-bed reactor for 48 h to ensure the Hg-adsorption saturation by the Br-doped V/TiO2. The set temperature was stable for more than 1h, and the concentration of Hg was analyzed by the coal-fired flue gas mercury analyzer QM201H.

Hg conversion (X) is defined as:

In order to compare the activity of different vanadia-based catalysts, the rate constant km was used as an evaluation index:

was the partial pressure of Hg0;

was the molar flow of Hg0 at the inlet of the reactor; wm is the mass of vanadium [29].

The vanadia content was detected by ICP analysis (see Table 1). The results indicated that the active vanadia content of the Br-doped V/TiO2 was 0.60～0.75 1%, which was lower than some conventional V-based SCR catalysts. The surface vanadium density (ns) was small, and the active component was in an effective dispersion state.

It was found that the vanadia content of commercial SCR catalysts used in China was generally 0.3～1.5% to ensure the high deNOx efficiency, small SO2 oxidation and ammonia slip. Therefore, the preparation of SCR catalysts with lower vanadium content and high mercury oxidation efficiency still has large challenges.

According to the physical adsorption isotherm classification proposed by IUPAC [31], the hypothermic N2 adsorption isotherms of the Br-doped V/TiO2 showed hysteresis loops, and capillary agglomeration occurred, which belonged to type IV isotherms. This isotherm was produced by mesopores, which consistent with the measured average pore diameter (between 7 and 17 nm). From the hysteresis loops, the change of the adsorption amount was not very steep but rather slow, indicating that the pore distribution range was relatively wide, and it should be a mixture of the cylindrical hole with open ends and the slit hole with parallel plate structure. When the relative pressure (P/P0) was low, the gas diffuses in the pores with a pore diameter of 1.5~100 nm, which is generally Knudsen diffusion.

In this study, N2, O2 and Hg were diffused in the Br-doped V/TiO2 catalyst by Knudsen diffusion. The resistance comes from the collision of molecules with the pore walls, and the diffusion coefficient Dk mainly depends on the temperature T and the pore radius r. 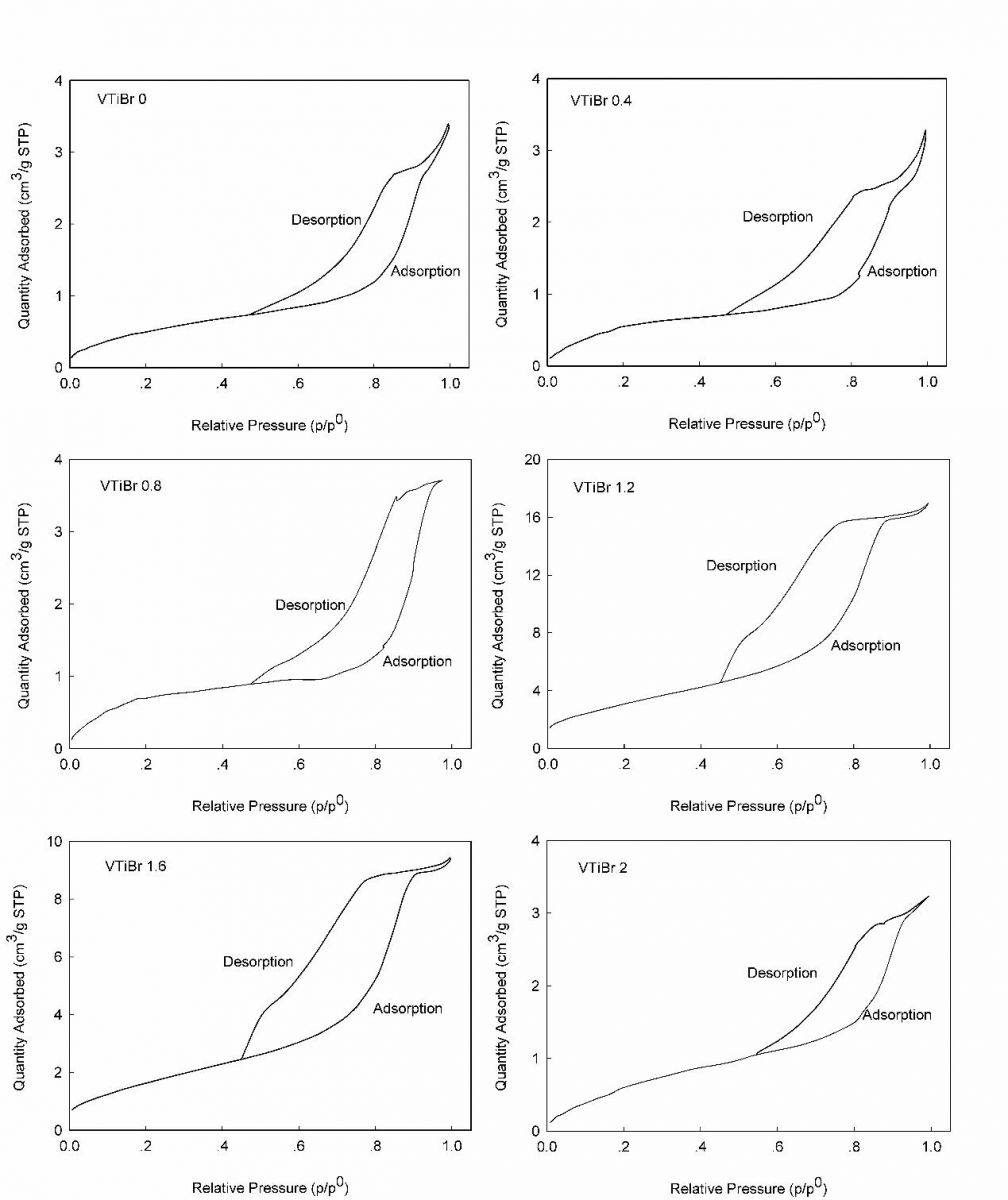 The XRD data was obtained in (Figure 3). The diffraction peak of the anatase phase TiO2 (JCPDS 21-1272) in the bromine-doped catalyst were narrower and stronger than that of the undoped Br sample (VTiBr0). Br may promote the formation of the crystal. In addition, compared with VTiBr 0, the diffraction angle of the anatase phase TiO2 on the Br-doped V/TiO2 becomes smaller, and the interplanar spacing of the crystal increases. According to the Bragg diffraction formula, this indicates that a solid solution is formed on the Br-doped catalyst. 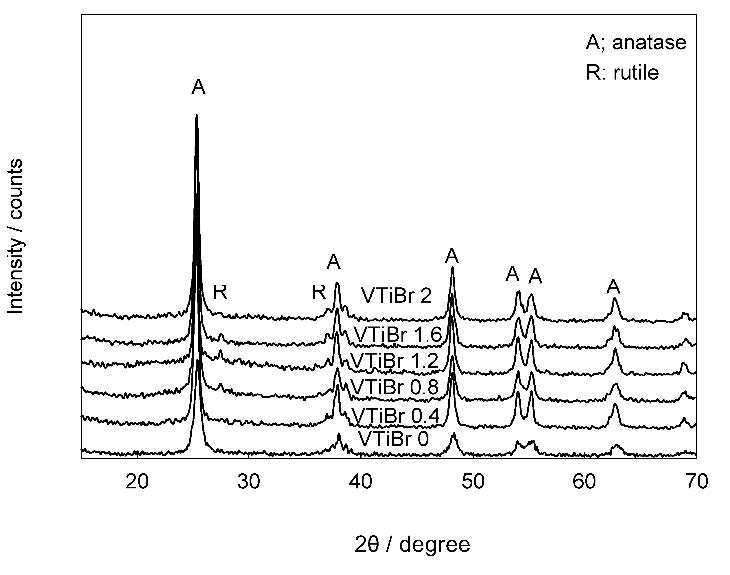 Figure 4 showed the EPR spectrum of the Br-doped V/TiO2 products at room temperature, which manifested an amount of V4+ ions grew on its surface and bulk phase. Although the loading of vanadia was low (see Table 1), peaks belonging to V4+ ions can be clearly detected. By integrating the peaks of V4+ ions, the peak area reduced in the following order: VTiBr 1.2> VTiBr 1.6 > VTiBr 0.8 > VTiBr 2 > VTiBr 0.4 > VTiBr 0. With the increasing of the Br-doping, the generated V4+ ions VTiBr 1.2 were the most among the Br-doped V/TiO2 samples. 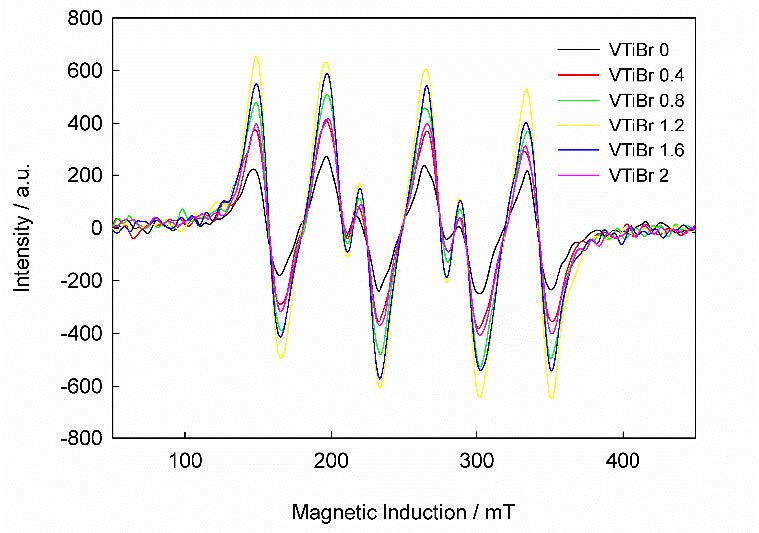 Figure 5 showed the XPS spectra of the samples. As can be seen from Figure 5(d), after the bromine was doped, the peaks shifted toward the low binding energy direction. Figure 5 showed that the Ti 2p3/2, V 2p3/2 and O 1s peaks of VTiBr 1.2 were shifted by about 0.2 eV, 0.5 eV and 0.3 eV, respectively, in the direction of low binding energy compared to the sample VTiBr 0. This meant that the electrons was lost on Ti and V, and the electrons obtained by O, so, the valence states of Ti and V were not completely +4 and +5, respectively. In addition, since the amount of doping of bromine was small, no significant Br information was obtained in Figure 5(d). 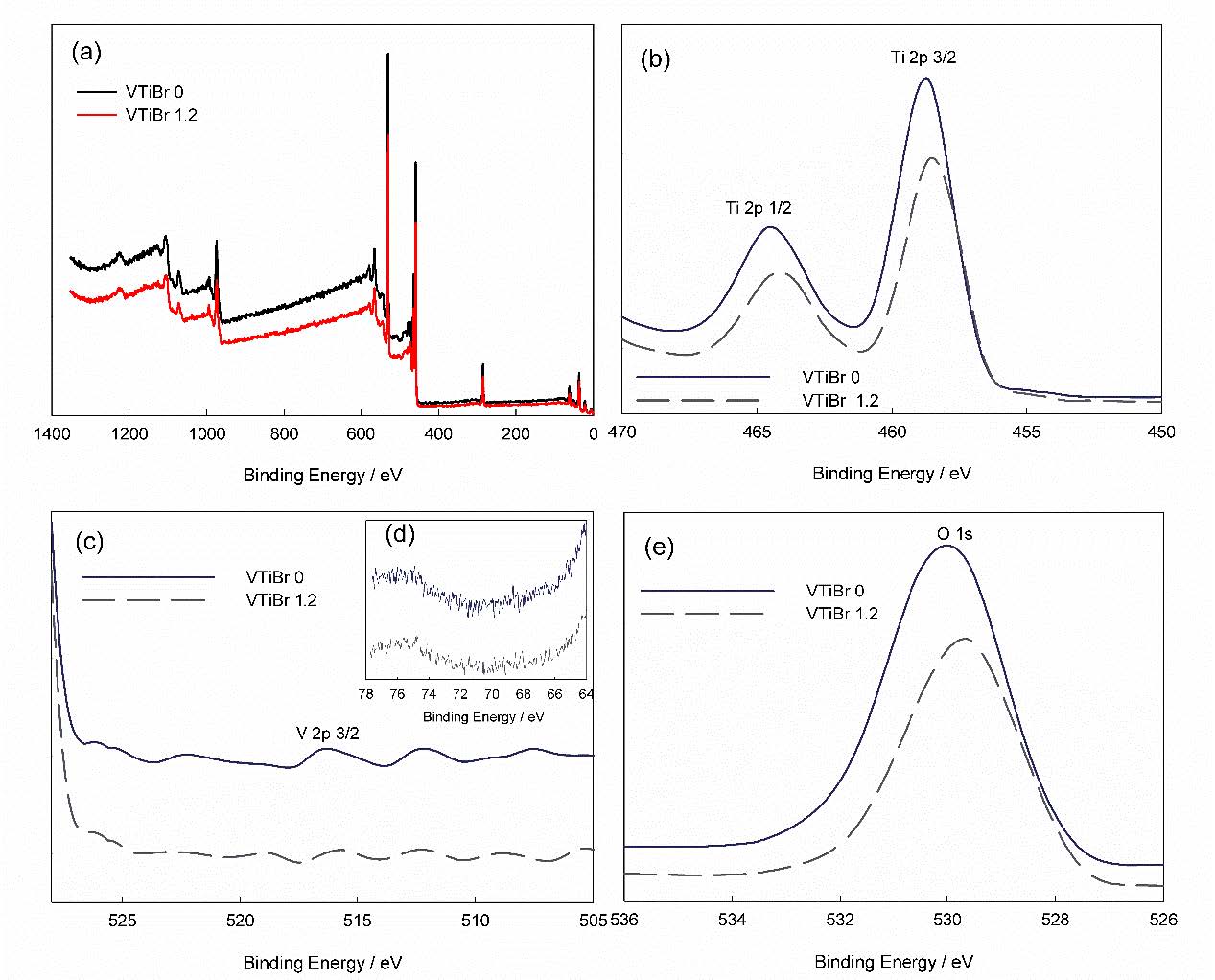 Figure 5: XPS spectra of the catalysts. 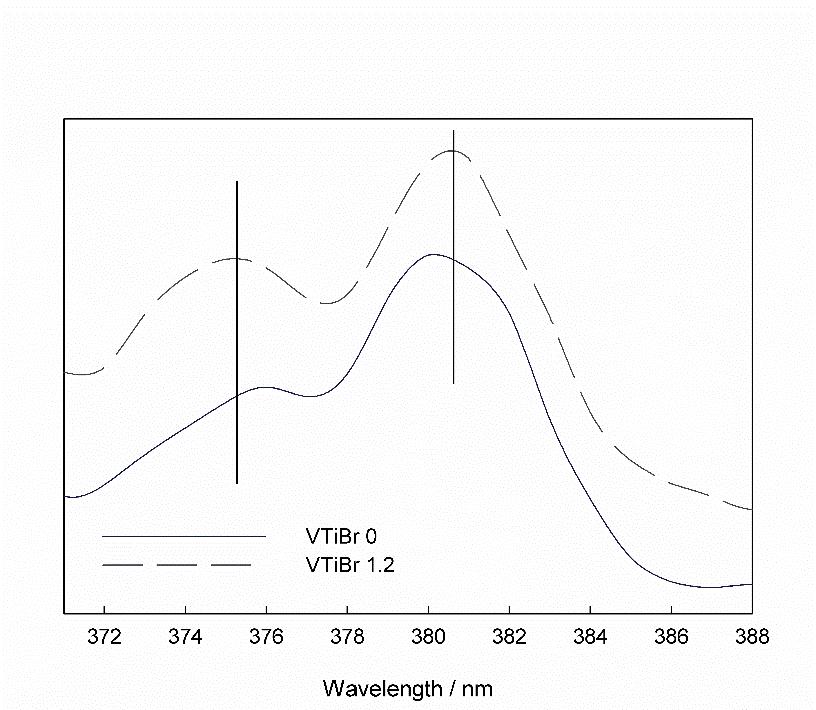 Figure 6: PL spectra of the catalysts.

The peak at 530 nm in Figure 7 indicated the presence of a color center with one electron [33-37], which was still present but reduced after bromine doping. Since oxygen adsorption to the color center can reduce the luminescence properties of the sample [38], the luminescence peak of the bromine-doped sample at 530 nm was weaker than that of the undoped sample, indicating the difference in oxygen adsorption capacity between the two samples, that is, the bromine-doped sample can adsorb more oxygen than the undoped sample. 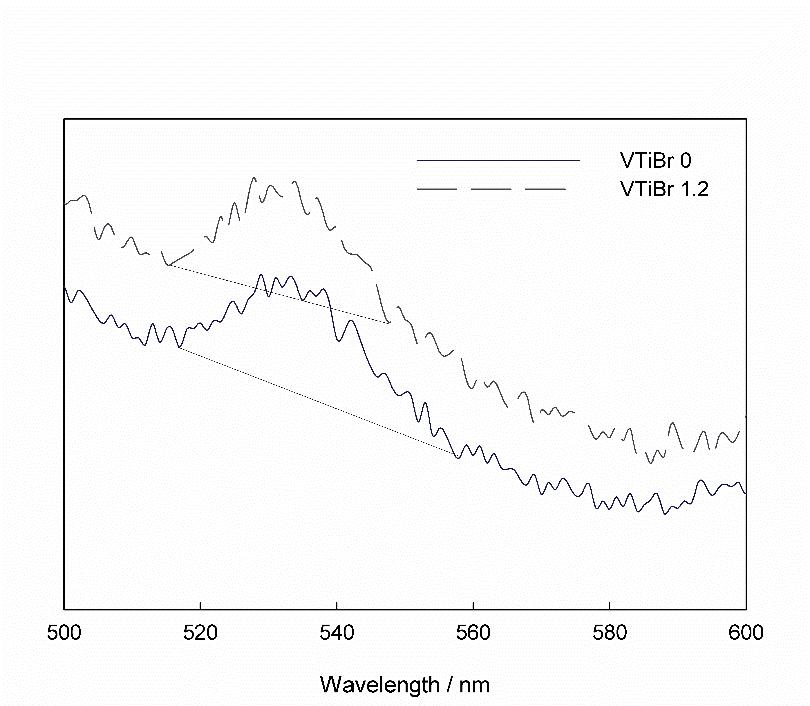 Figure 7: PL spectra around 530 nm of the catalysts.

In the mercury oxidation performance test, there was no hydrogen halide involved such as HCl, thus, it is no longer necessary to spray hydrogen halide into the flue gas under the actual application condition, which avoided the corrosion of hydrogen halides on the equipment, thus also reduced the operating costs. The test results also validated our catalyst design ideas. 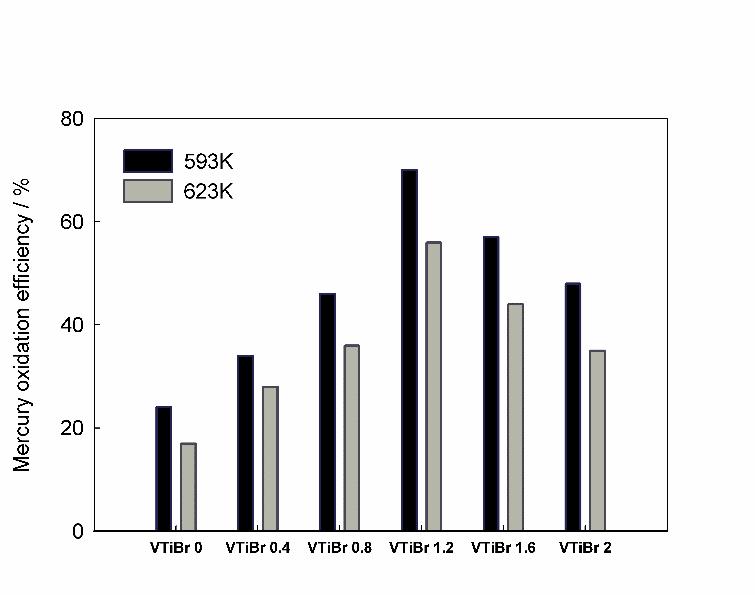 In order to reduce the mercury control cost of coal-fired flue gas, it is an effective and feasible way to control mercury by SCR denitrification synergistic oxidation. By analyzing the importance of non-metallic bromine in the existing mature mercury removal technology, this paper studied the effect of non-metallic bromine doping on the structure and properties of vanadia/titania catalyst from a non-metallic perspective, exploring new ideas for elemental mercury oxidation by SCR catalysts. The results showed that after bromine doping, the samples in this study contained mixed valences of Ti and V, and the bromine doping could increase the amount of V4+ and Ti3+, that is, the reduction characteristics or redox characteristics of the catalysts after bromine doping were improved. According to the basic theory of gas-solid phase catalytic reaction, the increase of the redox capacity of the catalyst enhances the catalytic activity of the catalyst, which was verified in the activity test. As the bromine doping amount increased, the activity first increased and then decreased, and the VTiBr 1.2 sample has the highest mercury oxidation performance.

The authors want to thank the ﬁnancial support from the Scientiﬁc and Technological Research Program of the Chongqing Municipal Education Commission (KJ1711266/ KJ1711286/ KJ1711290) and the Research Program of Chongqing University of Arts and Sciences (No: R2016CH07/ No: 2017RCH07). We gratefully acknowledge the many important contributions from the researchers of all the reports cited in this paper.

Copyright: Li Y. © 2019. This is an open-access article distributed under the terms of the Creative Commons Attribution License, which permits unrestricted use, distribution, and reproduction in any medium, provided the original author and source are credited.